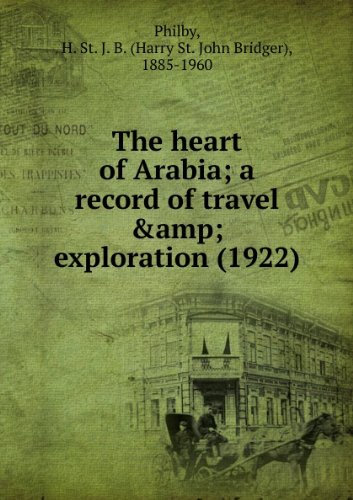 The Heart of Arabia: A Record of Travel and Exploration
by H. St. J. B. Philby

Description:
Of the pleasant year I spent sojourning and wandering amid the deserts and oases of Arabia I have endeavoured to compile a record, at once fully descriptive of my own experiences and designed to serve my successors as a faithful guide in their wanderings, when in their turn they take up the torch which has been held in the past by so many distinguished hands ...

The Great Navigators of the Eighteenth Century
by Jules Verne - Duckworth Publishers
Verne recounts the voyages of various European navigators to all parts of the globe. He gives detailed accounts of the explorers' climactic and navigational hazards, and their discoveries, conveying the sense of adventure enjoyed by the explorers.
(11987 views)

A Thousand Miles up the Nile
by Amelia B. Edwards - A. L. Burt Company
Sailing the Nile and armed with sketch-book and measuring tape, Amelia Edwards carefully recorded all she saw of the temples and monuments, and provided in A Thousand Miles Up The Nile the first general archaeological survey of Egypt's ruins.
(6392 views)

Across Asia on a Bicycle
by Thomas Gaskell Allen, William Lewis Sachtleben - The Century Co.
Two Washington University graduates sail to Liverpool and begin a 15,000-mile bicycle journey to Peking. The account begins in Asia Minor as the students cycle on through Persia and Turkestan, with detours to Merv, Bokhara, and Samarkand.
(13536 views)