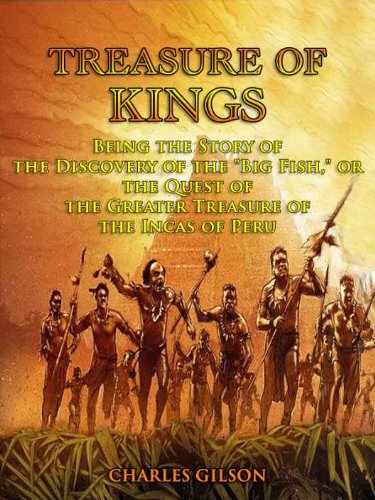 Treasure of Kings
by Charles Gilson

Description:
Eagerly, with hands that trembled somewhat, I studied the map. It will be remembered that the portion which Amos possessed had been torn across the place where was marked the Temple of Cahazaxa. Upon the fragment that had come into my hands by so strange and mysterious a chance, I was able to trace the route that I myself had taken from the temple ruins to the Wood of the Red Fish...

Saglek
by John Michaelson - Smashwords
In 1969 Lt. Michael Robinson was assigned to Saglek Air Force Station, an arctic outpost perched above the waters of Atlantic. Subjected to extraordinarily severe conditions he began a personal journey of revelation. Based on a true story.
(6157 views)

The Iron Pirate
by Max Pemberton - Cassell & Co.
The story of a great gas-driven iron-clad pirate ship, capable of outpacing the navies of the world and terrorizing the Atlantic. There are scalawags, ships sinking, mysterious buckets of treasure, dingy drinking joints, keelhauling ...
(5943 views)

A Tale of Two Tunnels
by William Clark Russell - Chatto & Windus
The ship Lovelace lay in the East India Docks, being newly arrived from an East India voyage. Her commander, Jackman, stood in her cabin and gazed in his glass; he looked at his face, and seemed to study it. There was a mark as of a blow...
(5318 views)

Robbery Under Arms
by Rolf Boldrewood
A story of life and adventure in the bush and in the goldfields of Australia. The book deals with the classic idea of an honest man driven to crime and the suffering it brings him. It is also full of the adventure and excitement that comes along.
(7042 views)