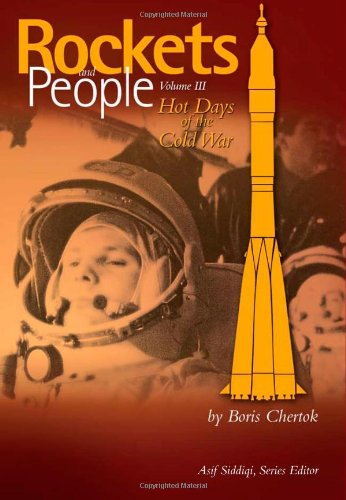 Rockets and People, Volume 3: Hot Days of the Cold War
by Boris Chertok

Description:
Chertok devotes a significant portion of the volume to the early years of Soviet human space flight in the early 1960's. These include a chapter on the Vostok and Voskhod programs, which left an indelible mark on early years of the 'space race', a lengthy meditation on the origins and early missions of the Soyuz space program, the flight and death of cosmonaut Vladimir Komarov during the very first piloted Soyuz flight in 1967.

Flying Beyond the Stall
by Douglas A. Joyce - NASA
The X-31 was unique in the world of experimental or X-airplanes. It was the only X-plane that was designed, manufactured, and tested as an international effort; a joint effort of the United States and Germany. It supported two separate test programs.
(5023 views)

Mariner Mission to Venus
- Jet Propulsion Laboratory
The book describes one phase of the U.S. civilian space program -- the journey of the Mariner spacecraft to the vicinity of Venus and beyond. It reports upon the measurements taken during the 'flyby' on December 14, 1962, 36,000,000 miles from Earth.
(3647 views)

The Apollo Spacecraft: A Chronology
by Ivan D. Ertel, at al. - NASA
The chronology of the Apollo spacecraft and the lunar mission provides documented information covering a wide range of happenings directly and indirectly related to the program. Written for historians and others interested in the great adventure.
(15685 views)

Psychology of Space Exploration
by Douglas A. Vakoch - NASA
Contemporary research in historical perspective. This e-book explores some of the contributions of psychology to yesterday's great space race, today's orbiter and International Space Station missions, and tomorrow's journeys beyond Earth's orbit.
(9381 views)