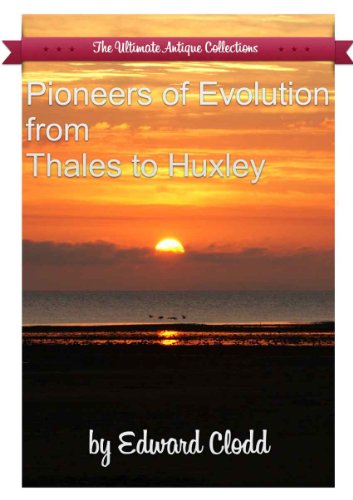 Pioneers of Evolution from Thales to Huxley
by Edward Clodd

Description:
This book needs only brief introduction. It attempts to tell the story of the origin of the Evolution idea in Ionia, and, after long arrest, of the revival of that idea in modern times, when its profound and permanent influence on thought in all directions, and, therefore, on human relations and conduct, is apparent.

Darwin's Precursors and Influences
by John Wilkins - The TalkOrigins Archive
It is sometimes claimed by those who wish to denigrate the achievements of Charles Darwin that he was little more than a 'serial plagiarist'. This essay aims to show that Darwin had influences, but that he was honest in his theoretical development.
(6001 views)

Introduction to Evolutionary Biology
by Chris Colby - The TalkOrigins Archive
Evolution unites all the fields of biology under one theoretical umbrella. This book is a brief introduction to evolutionary biology. The author attempts to explain basics of the theory of evolution and correct many of the misconceptions.
(8646 views)

The Descent of Man
by Charles Darwin - John Murray
This landmark work on evolutionary theory marked a turning point in the history of science with its vision of human nature as the product of evolution. Darwin argued that the noblest features of humans were the result of the natural processes.
(10862 views)

The Evolution of Aging
by Theodore C. Goldsmith - Azinet LLC
This book provides a historical review of biological aging theories including underlying evolution and genetics issues and describes exciting recent discoveries and new theories that are causing renewed interest in aging-by-design.
(11130 views)