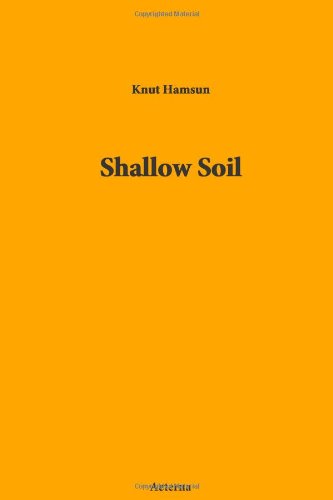 Description:
Not only is this book Knut Hamsun's most significant work, but it gives the very best description available of life in Christiania toward the close of the century. A book of exquisite lyric beauty, of masterly psychology, and finished artistic form.

The Road Leads On
by Knut Hamsun - eBooks@Adelaide
They had met during their younger days. The original fusion of their passion had taken place during a golden opportunity out in the berry field -- she had given him a certain look upon leaving the house and he had gone a round-about way and met her.
(5234 views)

The Growth of the Soil
by Knut Hamsun - eBooks@Adelaide
When Hamsun won the Nobel Prize in Literature, in 1920, it was mostly because of this 1917 novel, an epic vision of peasant life in Norway's backcountry. The saga of Isak and Inger and their hard times is by turns affecting and ponderous.
(6428 views)

Hunger
by Knut Hamsun - eBooks@Adelaide
A true classic of modern literature, described as one of the most disturbing novels in existence. A story of an artist who wanders the streets, struggling on the edge of starvation. As hunger overtakes him, he slides into paranoia and despair.
(9563 views)

Under the Autumn Star
by Knut Hamsun - eBooks@Adelaide
This is the story about the wanderer Knut Pedersen (actually Hamsun's real name), wandering around the Norwegian countryside doing such work as he can find, while having his eyes wide open to study nature and his fellow human beings.
(3727 views)