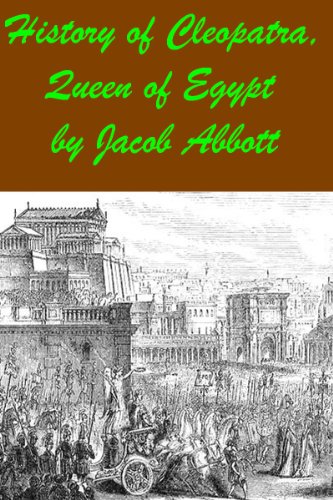 History of Cleopatra, Queen of Egypt
by Jacob Abbott

Description:
The story of Cleopatra is a story of crime. It is a narrative of the course and the consequences of unlawful love. In her strange and romantic history we see this passion portrayed with the most complete and graphic fidelity in all its influences and effects; its uncontrollable impulses, its intoxicating joys, its reckless and mad career, and the dreadful remorse and ultimate despair and ruin in which it always and inevitably ends.

Hatshepsut: From Queen to Pharaoh
by Catharine Roehrig (ed.) - Yale University Press
Leading Egyptologists investigate the circumstances that allowed or compelled Hatshepsut to become king; the relationship between Hatshepsut and Thutmose III during their joint reign; powerful figures in the royal court, particularly Senenmut; etc.
(4605 views)

UCLA Encyclopedia of Egyptology
- eScholarship
Egyptology studies the history, practices, and conceptual categories of a culture that was prolific in terms of texts, art, architecture, and other forms of material culture. The peer-reviewed articles are written by the world's leading scholars.
(7567 views)

Egyptian Pyramids: An Analysis of a Great Mystery
by Everett W. Fish - E. W. Fish
No problem of the present age so fully deserves the title 'A GREAT MYSTERY' as that which is involved in the origin and interpretation of the Great Pyramid and its lesser companions. They all belong to one epoch and to one race of invaders ...
(5493 views)

The Civilization of the Ancient Egyptians
by A. Bothwell Gosse - T. C. & E. C. Jack
The most notable quality of the Egyptian civilization is its permanent character. Instead of lasting only a few hundred years, it endures for thousands; in Egypt there appears to be no beginning, the civilization apparently starts mature.
(9930 views)