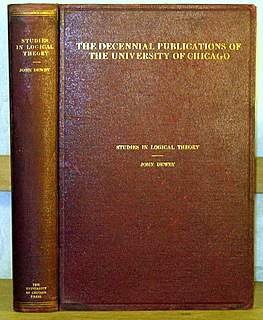 Description:
This volume presents some results of the work done in the matter of logical theory in the Department of Philosophy of the University of Chicago in the first decade of its existence. The eleven Studies are the work of eight different hands...

Studies and Exercises in Formal Logic
by John Neville Keynes - The Macmillan Company
In addition to a detailed exposition of certain portions of Formal Logic, the following pages contain a number of problems worked out in detail and unsolved problems, by means of which the student may test his command over logical processes.
(3781 views)

Deductive Logic
by St. George Stock - Longmans
The author's object has been to produce a work which should be thoroughly representative of the present state of the logic of the Oxford Schools. The qualities which he aimed at before all others were clearness and consistency.
(10684 views)