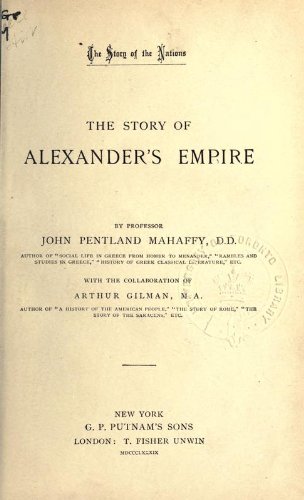 The Story of Alexander's Empire
by John Pentland Mahaffy

Description:
The story of the conquests of Alexander has been told many times, and his name is familiar in our mouths as household words; but the history of the different portions of the great Empire that he founded, how they rapidly gained and lost their independence, and finally were absorbed into the dominions of Rome, is by no means equally well known.

Athens from Cleisthenes to Pericles
by C. W. Fornara, L. J. Samons - University of California Press
This book covers the history of the Alcmeonid family of Cleisthenes and Pericles, the nature and development of Athenian democracy, the growth of Athenian empire, and the burgeoning antagonism between Athens and Sparta.
(13812 views)

A Manual of Ancient History
by A. H. L. Heeren - D. A. Talboys
The work combines the convenience of the Manuals with the synchronistic method of instruction; as the geography, chronology, and biography of the countries and states of the ancient world are brought at once under the eye of the reader.
(10435 views)