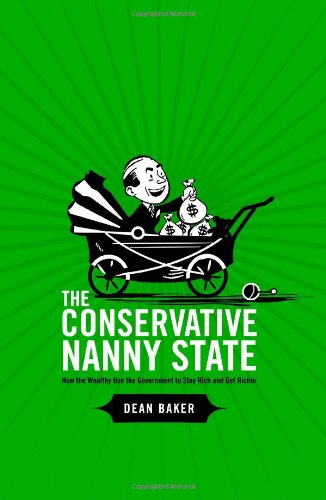 Description:
In his new book, economist Dean Baker debunks the myth that conservatives favor the market over government intervention. In fact, conservatives rely on a range of 'nanny state' policies that ensure the rich get richer while leaving most Americans worse off. It's time for the rules to change. Sound economic policy should harness the market in ways that produce desirable social outcomes -- decent wages, good jobs and affordable health care.

Why Scientists Disagree about Global Warming
by Craig Idso, Robert M. Carter, S. Fred Singer - Heartland Institute
A detailed analysis of one of the most controversial topics of the day. The authors make a compelling case against claims of a scientific consensus. Surveys of climate scientists find extensive disagreement on the underlying science ...
(4476 views)

Occupiers of Wall Street: Losers or Game Changers
by Bhaskar Sarkar - Smashwords
The Occupiers of Wall Street burst into media limelight on 17 September 2011. They inspired over 1500 protests against corporate greed and the nexus between politicians and corporation in 82 countries around the world by October 2011 ...
(7459 views)

Barack Obama's Post-American Foreign Policy
by Robert Singh - Bloomsbury Academic
Singh argues that Obama's approach of 'strategic engagement' was appropriate for a new era of constrained internationalism, but it has yielded modest results. Obama's search for the pragmatic middle has cost him political support at home and abroad.
(4772 views)

Turning Points in Ending the Cold War
by Kiron K. Skinner - Hoover Institution Press
The authors examine the end of detente and the new phase of the cold war in the 1980s, Reagan's radical new strategies, the peaceful revolutions in Poland and Hungary, the reunification of Germany, contributions of Gorbachev and Yeltsin, and more.
(13804 views)