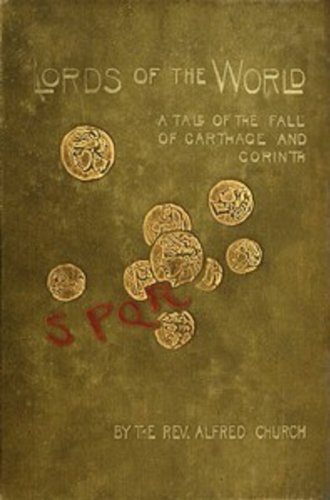 Lords of the World
by Alfred John Church

Description:
The year 146 B.C. was an annus mirabilis in the development of Roman dominion. I have attempted in this story to group some picturesque incidents round the person of a young Greek who struggles in vain to resist the destiny of the conquering race.

Carry On! A Story Of The Fight For Bagdad
by Herbert Strang - Oxford University Press
Mesopotamia has been brought by Time's revolution once more into the foreground of the history of the world. The plains where the Arabs reared a civilization of their own, have become once more the battle-ground of opposing armies.
(6086 views)

Shike
by Robert J. Shea
Beautiful young Taniko struggles under oppression as the mistress of the cruel Kublai Khan, and Jebu, a young monk, is transformed into a fierce warrior, in a saga of the ancient Orient during a time of bloodshed and magic.
(7103 views)

Zero the Slaver
by Lawrence Fletcher - Project Gutenberg
1,000 Pound Reward. The above-named Sum will be paid to any person giving information which will lead to the discovery of the whereabouts of a young Englishman named Richard Grenville, who was last seen at Durban on 15th December, 1877.
(7429 views)

The Secret Battle
by A. P. Herbert - Methuen & co
A novel which draws upon author's experiences as a junior infantry officer in the WWI, and has been praised for its accurate and truthful portrayal of the mental effects of the war on the participants. It contains a detailed description of Gallipoli.
(9223 views)