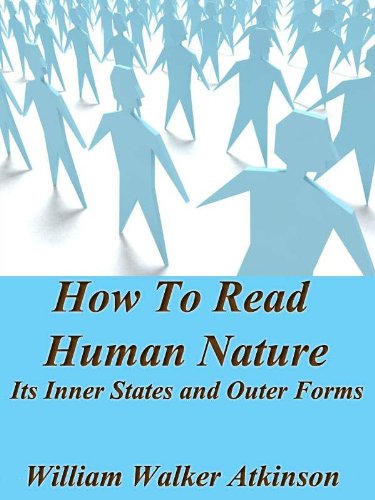 How to Read Human Nature
by William Walker Atkinson

Description:
This book is a guide to human body language, personality, character, and qualities. It takes reading body language and voice inflection for meaning to the next level, analyzing such elements as mental qualities, emotive qualities, relative qualities, and perceptive qualities in the human brain, reminding one of the study of phrenology.

Totem and Taboo
by Sigmund Freud - G. Routledge
With these essays, Freud applies his psychoanalytic method to various objects of study. With several implications for the fields of anthropology and religious studies, this Freud collection remains a diverse and fascinating read.
(7883 views)

A Beginner's Psychology
by Edward Bradford Titchener - The Macmillan Company
I lay less stress upon knowledge and more upon point of view. I shall be fully satisfied if the reader learns to be clear and definite in his objections, realizes his own point of view, and sticks to it in working out his own psychological system.
(16711 views)

Psychology: A Study Of Mental Life
by Robert S. Woodworth - Henry Holt and company
Modern psychology is an attempt to bring the methods of scientific investigation, which have proved immensely fruitful in other fields, to bear upon mental life and its problems. Originally published in 1921, the book is intended for the beginner.
(12917 views)