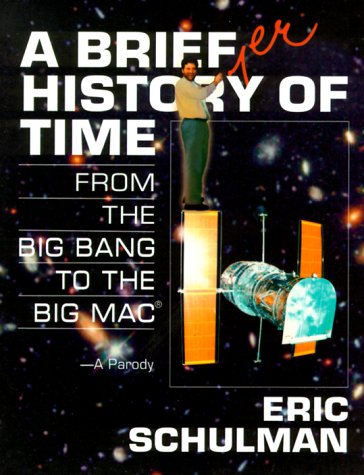 A Briefer History of Time: From the Big Bang to the Big Mac
by Eric Schulman

Description:
From the Big Bang to the evolution of humans and the resignation of Richard Nixon, an astronomer offers a highly irreverent, historically entertaining, and scientifically correct overview of the most important cosmic milestones since the beginning of time.

The History of Astrometry
by Michael Perryman - arXiv
The history of astrometry, the branch of astronomy dealing with the positions of celestial objects, is a lengthy chronicle, having its origins in earliest records of astronomical observations, and extending to the high accuracy observations today.
(4630 views)

Elements of Astrophysics
by Nick Kaiser - University of Hawaii
These are the notes for an introductory graduate course. They are meant to be a 'primer' for students embarking on a Ph.D. in astronomy. The level is somewhat shallower than standard textbook courses, but quite a broad range of material is covered.
(13016 views)

Recreations in Astronomy
by Henry White Warren - Project Gutenberg
This book has been written not only to reveal some of the highest achievements of the human mind, but also to let the heavens declare the glory of the Divine Mind. In the author's judgment, there is no gulf that separates science and religion.
(11166 views)

The Astronomy of the Bible
by E. Walter Maunder - Richard Clay & Sons
Why should an astronomer write a commentary on the Bible? Because commentators are not astronomers, and therefore either pass over the astronomical allusions of Scripture in silence, or else annotate them in a way which leaves much to be desired.
(14495 views)