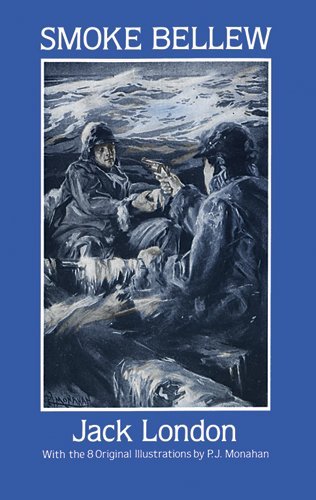 Description:
A group of short stories, published in book form in 1912. It takes us to the sub-zero temperatures of the Klondike during the Alaskan gold-rush days of 1897 in more London scribed adventures supporting his belief in Darwin's theory: Survival of the Fittest.

The Son of the Wolf
by Jack London - ManyBooks
These nine stories all take place during the Klondike gold rush of 1897. Unusual for a London collection, the tales are all loosely connected by a cast of recurring characters -- the inhabitants of Forty Mile, a town in the Yukon Territory.
(6846 views)

The People of the Abyss
by Jack London - Classic Reader
A book by Jack London about life in the East End of London in 1902. He wrote this first-hand account by living in the East End (including the Whitechapel District) for several months, sometimes staying in workhouses or sleeping on the streets.
(10230 views)

Hearts of Three
by Jack London - ManyBooks
Two men exactly alike in appearance, hunting for a treasure in the South sea islands, start the complication in this scenario novel written by Jack London. Graphic, clear and thrilling in style and with much of the old charm.
(5745 views)

The Sea Wolf
by Jack London - William Heinemann
While onboard a San Francisco ferry which collides with another ship in the fog, Humphrey van Weyden is picked up by Larsen, the captain of the seal-hunting schooner the Ghost. A brutal ship master, Wolf rules over his ship with an iron hand.
(6568 views)