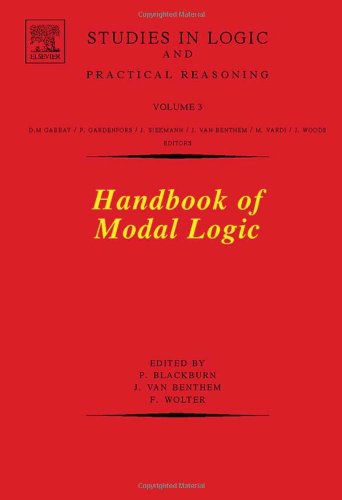 Description:
This Handbook documents the current state of modal logic, a lively area of logical research which was born in philosophy, but which has since made its way into mathematics, linguistics, computer science, AI, and even economic game theory.

Coalgebras and Modal Logic
by Alexander Kurz - ESSLLI
One of the achievements of the theory of coalgebras is to make clear that some seemingly different areas are related by duality. This text explains this duality. Recent research lead to the insight that modal logic is dual to equational logic.
(7695 views)

Basic Concepts in Modal Logic
by Edward N. Zalta - Stanford University
This is a text for dedicated undergraduates with no previous experience in modal logic. The book should prepare people for reading advanced texts in modal logic, such as Goldblatt, Chellas, Hughes and Cresswell, and van Benthem.
(9203 views)

Mathematics of Modality
by Robert Goldblatt - CSLI Publications
Modal logic is the study of modalities - expressions that qualify assertions about the truth of statements. This volume collects the author's papers on modal logic, beginning with his work on the duality between algebraic and set-theoretic modals.
(10054 views)