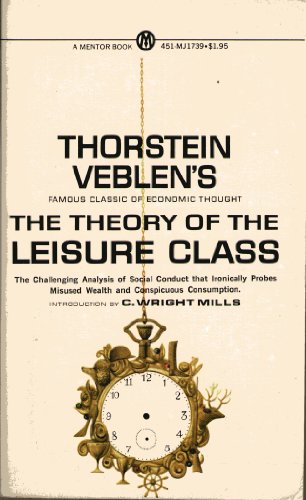 The Theory of the Leisure Class
by Thorstein Veblen

Description:
Classic of economic and social theory offers a satiric examination of the hollowness and falsity suggested by the term 'conspicuous consumption', exposing the emptiness of many cherished standards of taste, education, dress, and culture. Since first appearing in 1899, it has become a classic of social theory that has contributed to the modernization of economic policy.

Capital as Power: A Study of Order and Creorder
by Jonathan Nitzan, Shimshon Bichler - Routledge
The authors address the old theoretical conundrum in political economy -- the theory of capital -- with a view to supplying a more satisfactory answer to the question 'what is capital?' The work fits into the tradition of radical political economy.
(8654 views)

Economic Fables
by Ariel Rubinstein - Open Book Publishers
Part memoir, part crash-course in economic theory, this deeply engaging book by one of the world's foremost economists looks at economic ideas through a personal lens. Rubinstein challenges many of the central tenets of game theory.
(3881 views)

Economics and Language
by Ariel Rubinstein - Cambridge University Press
Five essays investigating both the economics of language and the language of economics. The author touches on the structure of binary relations in daily language, the evolutionary development of the meaning of words, and more.
(12828 views)

The Ultimate Foundation of Economic Science
by Ludwig von Mises - Liberty Fund Inc.
Mises argues that economics is a science because human action is a natural order of life and that it is the actions of humans that determine markets and capital decisions. This book brings together all of the themes from Mises's previous work.
(12488 views)