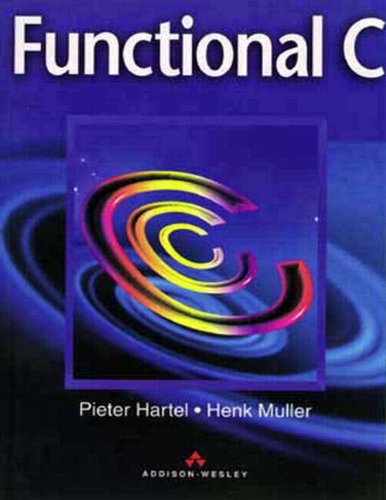 Description:
Functional C teaches how to program in C, assuming that the student has already learnt how to formulate algorithms in a functional style. By using this as a starting point, the student will become a better C programmer, capable of writing programs that are easier to comprehend, maintain and that avoid common errors and pitfalls.

Programming in C: UNIX System Calls and Subroutines using C
by A. D. Marshall - Cardiff University
This book is guide to UNIX software development in C for professional programmers and students. It focuses on the UNIX system call interface, the programming interface between the UNIX Kernel and applications running in the UNIX environment.
(21338 views)

The GNU C Programming Tutorial
by Mark Burgess, Ron Hale-Evans - Free Software Foundation
This book is a tutorial for the computer programming language C. You should have some basic computer literacy: to be able to run a program, edit a text file, etc. The tutorial introduces basic ideas in a logical order and progresses steadily.
(22370 views)

The C Book: Featuring the ANSI C Standard
by Mike Banahan, Declan Brady, Mark Doran - Addison-Wesley Pub
Use this book to produce powerful and portable code. The C Book is dedicated to programmers who have some experience of using a modern high-level procedural programming language. Learn about new standards and how they affect existing C code.
(24192 views)

Beej's Guide to Network Programming - Using Internet Sockets
by Brian Hall
A brief how-to guide on network programming using Internet sockets, written for anybody who is just starting out with socket programming. The section on Windows programming is also included. The guide is updated for IPv6.
(25255 views)