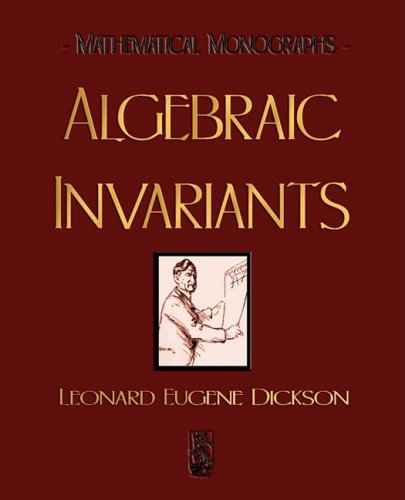 Description:
This introduction to the classical theory of invariants of algebraic forms is divided into three parts: linear transformations; algebraic properties of invariants and covariants; symbolic notation of Aronhold and Clebsch.

A Treatise on the Theory of Invariants
by Oliver E. Glenn - Project Gutenberg
The object of this book is to present in a volume of medium size the fundamental principles and processes and a few of the multitudinous applications of invariant theory, with emphasis upon both the nonsymbolical and the symbolical method.
(8078 views)

The Octonions
by John C. Baez - University of California
The octonions are the largest of the four normed division algebras. The author describes them and their relation to Clifford algebras and spinors, Bott periodicity, projective and Lorentzian geometry, Jordan algebras, and the exceptional Lie groups.
(15495 views)

Commutator Theory for Congruence Modular Varieties
by Ralph Freese, Ralph McKenzie - Cambridge University Press
This book presents the basic theory of commutators in congruence modular varieties and some of its strongest applications. The authors take an algebraic approach, using some of the shortcuts that Taylor and others have discovered.
(9081 views)