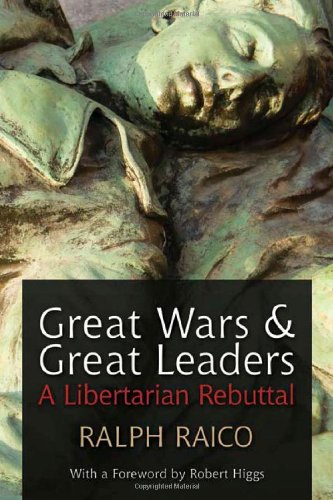 Description:
The great historian of classical liberalism strips away the veneer of exalted leaders and beloved wars. Professor Ralph Raico shows them to be wolves in sheep's clothing and their wars as attacks on human liberty and human rights.

A Guide to Writing in History and Classics
by Mark Damen - Utah State University
The medium of history and classics as intellectual disciplines is the written word. Sloppiness of expression is as detrimental to any historical study. This guide is designed to help you avoid some of the pitfalls into which students often fall.
(5188 views)

The History of the Nineteenth Century in Caricature
by Cooper, Maurice - Dodd, Mead and Company
While the impulse to satirize public men in picture is probably as old as satiric verse, the political cartoon, as an effective agent in molding public opinion, is essentially a product of modern conditions. Its success depends upon its timeliness.
(9030 views)

Introduction to the Study of History
by C. Langlois, C. Seignobos - Henry Holt and company
This is not a summary of universal history for the use of beginners. The book is intended, not as a summary of ascertained facts or a system of general ideas on universal history, but as an essay on the method of the historical sciences.
(8677 views)