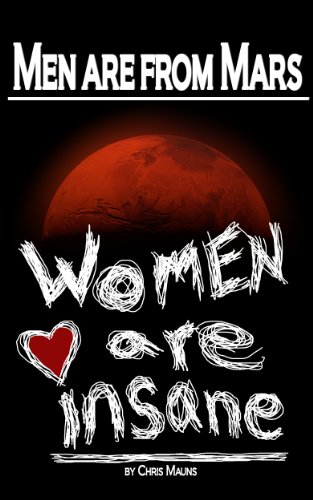 Men are from Mars, Women are INSANE
by Chris Mauns

Description:
This book is your first line of defense vs the madness the female mind holds! In a humorous but scary way it will guide you through the treacherous waters of the relationship and give you an idea of what you can expect from your woman, and even better: how to deal with it!

The Cynic's Rules of Conduct
by Chester Field Jr. - Henry Altemus Company
'There is only one worse break than asking a woman her age: it is looking incredulous when she tells it.' 'If you would have a serene old age never woo a girl who keeps a diary.' 'A chef is a cook who gets a salary instead of wages.'
(10812 views)

How to be Happy Though Married
by Edward John Hardy - T Fisher Unwin
We strongly recommend this book as one of the best of wedding presents. It is a complete handbook to an earthly Paradise, and its author may be regarded as the Murray of Matrimony and the Baedeker of Bliss. Admirably written volume.
(10885 views)

Till You Drop
by Mat Coward - Smashwords
Suppose all the monsters in the world went on strike. Fear is an essential part of human life, and for centuries it's been provided by vampires, werewolves, zombies and ghouls. But what happens when the monsters take to the picket line?
(7621 views)

The Diary of a Nobody
by George Grossmith, Weedon Grossmith - A. A. Knopf
The diary of a clerk in London, an old fashioned humourous book. It documents in hilarious detail the everyday life of the lower middle class during the Great Victorian age. A classic masterpiece with some nice subtle humor.
(14914 views)