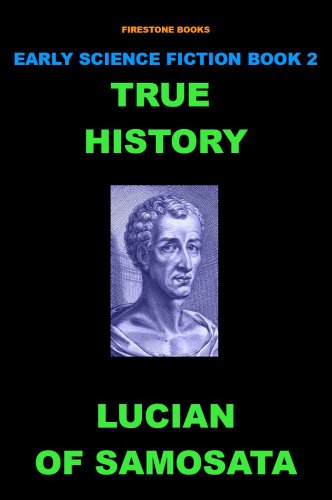 The True History
by Lucian of Samosata

Description:
Lucian of Samosata (125 - c.180) was a Greek satirist of Syrian or Assyrian extraction, and True History is perhaps his most well-known tale. In this tale, the protagonist visits the Moon, meets extraterrestrial creatures, and takes part in interplanetary warfare. This piece of fantastical fiction parodies many works such as Homer's Odyssey, and is certainly a contender for the title of earliest science fiction story.

The Underground City
by Jules Verne - Project Gutenberg
Receiving a letter from an old colleague, mining engineer James Starr sets off for the old Aberfoyle mine. From the outset, mysterious happenings start to occur around the main characters, attributed initially to goblins and firemaidens.
(10283 views)

Star Maker
by William Olaf Stapledon - Feedbooks
A poetic and deeply philosophical work, the true classics of SF. The book challenges preconceived notions of intelligence and awareness, and ultimately argues for a broadened perspective that would free us from our inevitable anthropomorphism.
(7843 views)

Five Thousand Miles Underground
by Roy Rockwood - ManyBooks
What does an enterprising inventor do to follow up the marvelous dirigible-ship Monarch? Cobble it together into an astounding vessel that travels on both air and sea, and then head more than twenty thousand leagues under the Earth!
(3828 views)