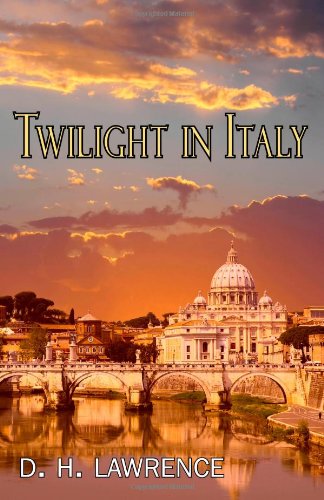 Description:
Twilight in Italy by D. H. Lawrence is a brilliantly written travelogue based on his journal. He embarked South, to Italy on foot with his German wife Frieda, and has described all his thrilling and interesting experiences. Leaving out the famous and the historical, he visits the suburbs and the people of Italy and beautifully reflects on their lifestyles.

The Plumed Serpent
by D. H. Lawrence
In this novel, Kate Leslie, an Irish widow visiting Mexico, finds herself equally repelled and fascinated by what she sees as the primitive cruelty of the country. As she becomes involved with Don Ramon and General Cipriano, her perceptions change.
(7514 views)

The Trespasser
by D. H. Lawrence - Duckworth Overlook
The Trespasser is the second novel written by D. H. Lawrence. It drew upon the experiences of a friend of Lawrence, Helen Corke, and her adulterous relationship with a married man. Lawrence worked from Corke's diary, with Helen's permission.
(9979 views)

The Rainbow
by D. H. Lawrence - Random House
Most of the book is about the youth and coming to age of Ursula Brangwan. Lawrence's feeling for and understanding of his female characters is astounding, particularly when compared with that of other writers of his time.
(7294 views)

Sons and Lovers
by D. H. Lawrence - The Viking Press
The story is set in the coalfields of the author's youth, it follows a boy's growth into manhood in a working-class family. Paul Morel is a young artist torn between desire for two young beauties and affection for his mother.
(11978 views)