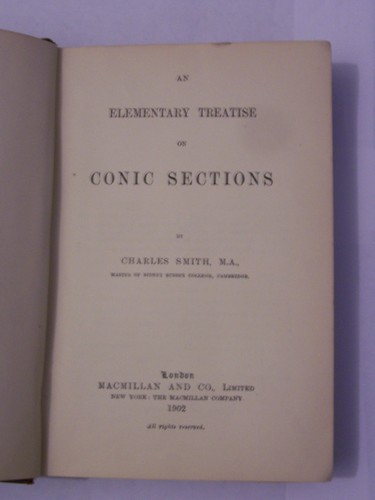 An Elementary Treatise on Conic Sections
by Charles Smith

Description:
In the following work I have investigated the more elementary properties of the Ellipse, Parabola, and Hyperbola, defined with reference to a focus and directrix, before considering the General Equation of the Second Degree. I believe that this arrangement is the best for beginners.

Coordinate Geometry
by Henry B. Fine, Henry D. Thompson - The MacMillan Company
Contents: Coordinates; The Straight Line; The Circle; The Parabola; The Ellipse; The Hyperbola; Transformation Of Coordinates; The General Equation Of The Second Degree; Sections Of A Cone; Systems Of Conics; Tangents And Polars Of The Conic; etc.
(16721 views)

First Principles of Symmetrical Beauty
by David Ramsay Hay - W. Blackwood and sons
From the table of contents: Nature of the science of aesthetics explained; Plane figures the bases of all forms; The isosceles triangle; Universal application of the composite ellipse in the arts of ornamental design; and more.
(12289 views)

Euclid's Elements
by D.E.Joyce
Online edition of Euclid's Elements, one of the most beautiful and influential works of science in the history of humankind. The text of all 13 Books is complete, and all of the figures are illustrated using a Java applet called the Geometry Applet.
(14501 views)