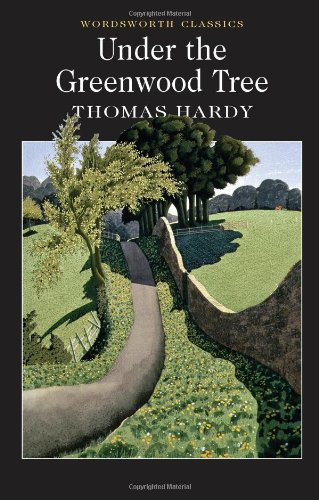 Under the Greenwood Tree
by Thomas Hardy

Description:
Under the Greenwood Tree is Thomas Hardy's one and only rural idyll, a startling contrast to his other Wessex tales. It appears to be pastoral romance at its most sunlit and good humoured, and has been called the 'most nearly flawless of Hardy's novels'.

The Trumpet-Major
by Thomas Hardy - ManyBooks
Anne Garland is pursued by three suitors: John Loveday, the trumpet major in a British regiment, honest and loyal; his brother Bob, a flighty sailor; and Festus Derriman, the cowardly nephew of the local squire. The setting is the Napoleonic wars.
(7397 views)

Life's Little Ironies
by Thomas Hardy - Macmillan
The phrase 'life's little ironies' was coined by Hardy as the title for this volume. Unified by his irony, strong visual sense, and engaging characters, these stories deal with the tragic and the humorous, the metaphysical and the magical.
(10297 views)

A Pair of Blue Eyes
by Thomas Hardy - William Tinsley
Blue-eyed Elfride has little experience of the world beyond, and becomes entangled with two men. Written at a crucial time in Hardy's life, this book expresses more directly than any of his novels the events that made him the writer he was.
(9525 views)

Desperate Remedies
by Thomas Hardy - ManyBooks
A tale of mystery, entanglement, surprise and moral obliquity. Blackmail, murder and romance are among the ingredients of Hardy's first published novel, and in it he draws blithely on the 'sensation novel' perfected by Wilkie Collins.
(6892 views)