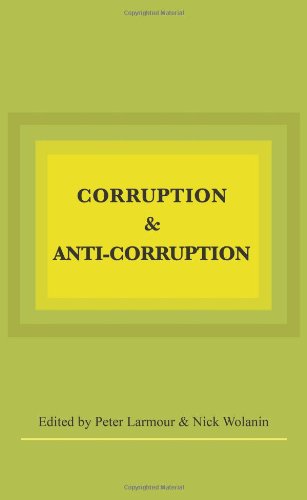 Description:
Corruption and Anti-Corruption deals with the international dimensions of corruption, including campaigns to recover the assets of former dictators, and the links between corruption, transnational and economic crime. It deals with corruption as an issue in political theory, and shows how it can be addressed in campaigns for human rights.

A People's Politics
by Keat Peng Goh - Smashwords
This author subscribes to the principle of check and balance in all human enterprises and endeavours to mitigate the effects of human sin. Therefore he supports a two-party system as the only legitimate democratic process...
(8465 views)

Democracy and Revolutionary Politics
by Neera Chandhoke - Bloomsbury Academic
By exploring the concept of political violence from the perspective of critical political theory, Neera Chandhoke investigates its nature, justification and contradictions. She uses the case study of Maoist revolutionaries in India ...
(6260 views)

The Social Contract
by Jean-Jacques Rousseau - J. M. Dent
Rousseau argues that all government is fundamentally flawed and that modern society is based on a system of inequality. The philosopher proposes an alternative system for the development of self-governing, self-disciplined citizens.
(10329 views)