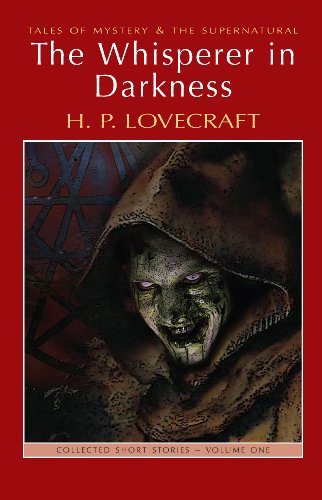 The Whisperer in Darkness
by H.P. Lovecraft

Description:
An Arkham university professor is contacted by a farmer living in a remote part of Vermont, who claims to have evidence of aliens living in the hills and mining a mysterious metal. After visiting, the professor becomes alarmed at the mysterious change in the behavior of the farmer, including his assertion that the aliens can extract a human brain and keep it alive in jar for eternity.

He
by H.P. Lovecraft - BooksFairy.com
The story tells of an unnamed narrator, who has moved from New England to New York City and greatly regretted it. One night, while wandering an older part of town, he happens upon a man strangely dressed in garments from the eighteenth century.
(8154 views)

At the Mountains of Madness
by H.P. Lovecraft - ManyBooks
On an expedition to Antarctica, Professor Dyer and his colleagues discover the remains of ancient life-forms. Through a series of dark revelations, violent episodes, and misunderstandings, the group learns of Earth's secret history and legacy.
(6093 views)

The Haunter of the Dark
by H.P. Lovecraft - BooksFairy.com
H P Lovecraft is the most influential horror writer of the 20th century. His stories of occult and cosmic terror have drawn praise from William S. Burroughs and Jorge Luis Borges, and continue to inspire new generations of writers and artists.
(11509 views)

The Shadow over Innsmouth
by H.P. Lovecraft
'The Shadow Over Innsmouth' is a short novel about a weird hybrid race of humans and creatures resembling a cross between a fish and a frog, which lives in the seaside village of Innsmouth. A dark, brooding story, typical of Lovecraft at his best.
(6261 views)