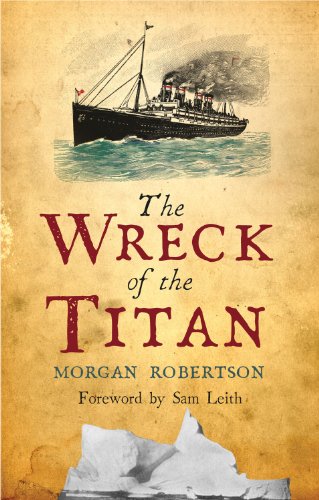 The Wreck of the Titan
by Morgan Robertson

Description:
Once seen as a prediction of the sinking of the Titanic, The Wreck of the Titan was written fourteen years before that ill-fated event of 1912. In this 1898 novella, John Rowland, a disgraced former Royal Navy lieutenant, has taken employment as a lowly deck hand aboard the largest ship ever to have sailed, the Titan.

War and Peace
by Leo Tolstoy - Project Gutenberg
Tolstoy's epic novel War and Peace is a study of 19th-century Russian society. Concerned with the histories of aristocratic families during the war against Napoleon, realistic details and psychological analysis. One of the greatest classic novels.
(15769 views)

From Kingdom to Colony
by Mary Devereux - Little, Brown, and Co.
When William, Duke of Normandy, invaded England in 1066, and achieved for himself the title of 'Conqueror', one of those who accompanied him was Robert D'Evreux, younger son of Earl of Rosmar, feudal owner of the town of his name in Normandy...
(6154 views)

The Storm Centre
by Charles Egbert Craddock - The MacMillan Company
The place reminded him then and later of the storm centre of a cyclone. Outside the tempests of Civil War raged. He could hear, as he sat in the quiet room, the turbulent drums fitfully beating in tented camps far down the Tennessee River.
(9725 views)

Against the War
by Roland Menge - againstthewarnovel.com
Against the War is a historical novel examining the response of the Vietnam war generation to the Vietnam war and the effect of the war on American society. The book provides an intellectual and cultural history of the early counterculture...
(5786 views)