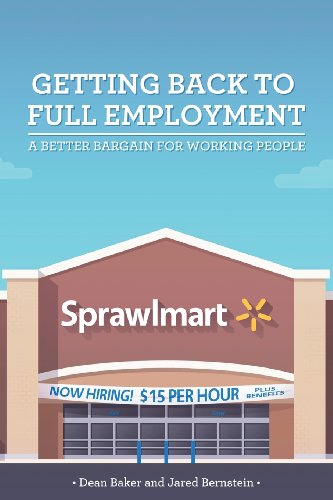 Getting Back to Full Employment: A Better Bargain for Working People
by Jared Bernstein, Dean Baker

Description:
Real wage growth for workers in the bottom half of the income scale is highly dependent on the overall rate of unemployment. The authors present a broad set of policies designed to boost growth and get the unemployment rate down to a level where far more workers have a fighting chance of getting ahead.

The Case for Discrimination
by Walter Block - Ludwig von Mises Institute
Discrimination is an inevitable feature of the material world where scarcity of goods and time is the pervasive feature. There is no getting around it. Without discrimination, there is no economizing taking place. It is chaos.
(6603 views)

The Global Economic Crisis: Systemic Failures and Multilateral Remedies
- UNCTAD
The report highlights the areas in which the global economy experienced systemic failures. UNCTAD examines some of the problems to be tackled immediately because they can only be addressed through recognition of their multilateral dimensions.
(14395 views)

Outline of the U.S. Economy
by Peter Behr - U.S. Department of State
The financial crash of 2008 brought a sudden halt to a quarter-century of U.S.-led global economic growth. The U.S. economy of the 21st century little resembles that of the 18th, but acceptance of change and embrace of competition remain unchanged.
(7941 views)

America's Great Depression
by Murray N. Rothbard - Ludwig Von Mises Institute
A staple of modern economic literature, crucial for understanding a pivotal event in American and world history. It is the definitive treatment of the causes of the depression. The book remains canonical today because the debate is still very alive.
(10407 views)