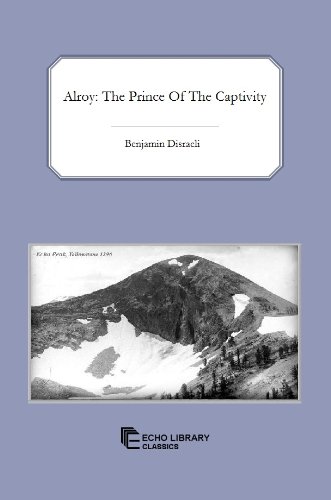 Alroy: The Prince of the Captivity
by Benjamin Disraeli

Description:
Probably the first Jewish historical novel ever published. D'Israeli describes David as a young man who was known as a descendant of King David and who was accepted as being the king of the Jews before he proclaimed himself the messiah. We read how he kills the brother of the Sultan who was trying to rape his sister and his adventures during his flight to save himself from the Sultan's wrath...

Tancred: Or, The New Crusade
by Benjamin Disraeli
This novel is a part of a sequence sometimes called the Young England trilogy. It is concerned with a religious and even mystical theme: the question of how Judaism and Christianity are to be reconciled, and the Church reborn as a progressive force.
(4365 views)

Coningsby
by Benjamin Disraeli - R.B. Johnson
The book is set against a background of the real political events of the 1830s in England that followed the enactment of the Reform Bill. Disraeli sets out his own beliefs including the need for social justice in a newly industrialized society.
(4271 views)

Venetia
by Benjamin Disraeli - Henry Colburn
This story is extremely well written and engaging. It mangles and entangles the histories of Lord Byron and Percy Bysshe Shelley so it can not be said to be a true story, but it is a thinly veiled fiction about these two poets.
(5108 views)

The Voyage of Captain Popanilla
by Benjamin Disraeli - H. Colburn
There is an island in the Indian Ocean, so unfortunate as not yet to have been visited either by Discovery Ships or Missionary Societies. It is a place where all those things are constantly found which men most desire to see ...
(4109 views)