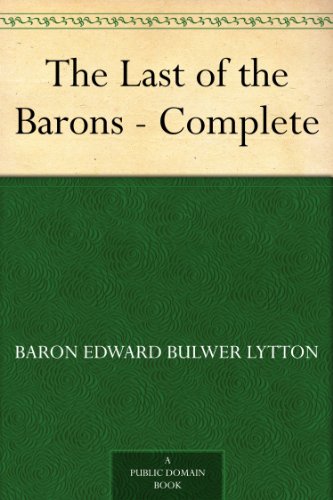 The Last of the Barons
by Edward Bulwer-Lytton

Description:
The Last of the Barons is a historical novel by the English author Edward Bulwer-Lytton first published in 1843. Its plot revolves around the power struggle between the English King Edward IV and his powerful minister Earl of Warwick. The King is portrayed as effeminate, capricious and licentious, in contrast with the Earl, shown as a distinguished warrior and politician, great patriot and affectionate father.

A Strange Story
by Edward Bulwer-Lytton - S.H. Goetzel
This story is told from the perspective of Dr. Allan Fenwicke, a rational materialist if there ever was one. He publically debunks the spiritualist beliefs of his fellow physician Dr. Lloyd, and thereby hastens his colleague's demise...
(4137 views)

Athens: Its Rise and Fall
by Edward Bulwer-Lytton - G. Routledge
Since it is the letters, yet more than the arms or the institutions of Athens, which have rendered her illustrious, it is my object to combine an elaborate view of her literature with a complete and impartial account of her political transactions.
(8855 views)

The Last Days of Pompeii
by Edward Bulwer-Lytton
Classic Victorian tale of the last days of Pompeii, doomed city that lay at the feet of Mount Vesuvius. From poets to flower-girls, gladiators to Roman tribunes, here is a story of their lives, their loves, and the tragic fate that awaited them.
(10207 views)

The Coming Race
by Edward Bulwer-Lytton - ManyBooks
An English man finds himself suddenly trapped in a subterranean world inhabited by an ancient race of advanced beings. The story describes a near future world characterized by female dominance, physical perfection, and vast technological progress.
(7472 views)