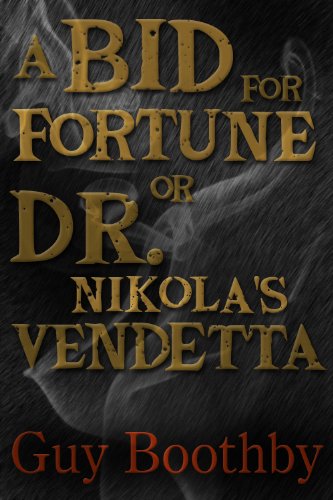 A Bid for Fortune
by Guy Boothby

Description:
Richard Hatteras, on holiday in Sydney, rescues a lovely young woman in distress, the start of a series of events that sees him falling in love and becoming ever more entangled in the machinations of the shadowy Doctor Nikola, villain, gentleman, and occult adventurer, who will stop at nothing to steal his prize.

The Lust of Hate
by Guy Boothby - ManyBooks
Mr. Boothby is at his best in this romance, which is characterized by unflagging interest and by most stirring adventures in which Dr. Nikola plays a leading part. 'Dr. Nikola' was considered one of the most thrilling stories ever published.
(5808 views)

The Kidnapped President
by Guy Boothby - Ward, Lock & Co.
How well I remember the day on which I was appointed fourth officer of the ocean liner Pernambuco, running from London to South America. I should here remark that I held a second officer's certificate, but I was glad enough to take what I could get..
(3132 views)

The Red Rat's Daughter
by Guy Boothby - Ward, Lock and Co. ltd
John Grantham Browne uttered a cry of horror. The girl had wandered off the path, slipped down the bank, and was now clinging to a tree only a few feet removed from the brink of one of the most terrible precipices along the Norwegian coast ...
(2961 views)

A Cabinet Secret
by Guy Boothby - F. V. White
Witty spy adventure set during the Boer Wars of the late 19th Century. While the War between England and the South African Republics forms the basis of the story, the characters and incidents therein described are purely fictional ...
(2733 views)