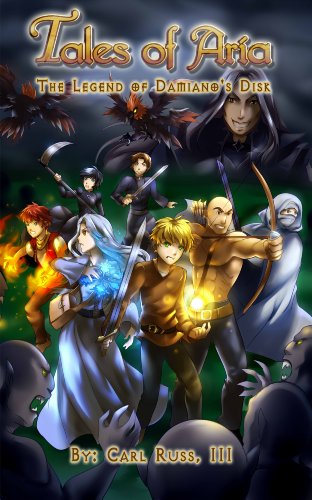 Tales of Aria: The Legend of Damiano's Disk
by Carl Russ, III

Description:
Aria is a world riddled with an epidemic. Two years have passed since the day strange monsters emerged from out of no where, paralyzing the otherwise peaceful lives of its citizens. Since then, few people dare to live outside the confines of the cities, fearing the dangers lurking beyond the protection of a mysterious army known as 'the Knowms.'

Kundalini Awakens Zeballos
by Mallory Wilkins - Bibliotastic.com
Airik Alcadinho has a vision of an environmentally friendly retreat. It is a healing habitat for kids from different cultures who suffer depression and guilt from rebelling against family heritage while attempting to be more like their friends.
(5835 views)

Entropic Quest
by Tom Lichtenberg, John Lichtenberg - Feedbooks
Four people are selected, seemingly at random, by an invisible being who communicates to them through wild animals. They are told they must go somewhere, find something, take it somewhere and do something with it. This is all they know.
(6174 views)

Butcher Bird
by Richard Kadrey - Night Shade Books
Spyder Lee is a happy man who owns a tattoo shop. One night a demon tries to bite his head off before he’s saved by a stranger. The demon infected Spyder so that he can suddenly see the world as it really is: full of angels, demons and monsters.
(12104 views)

Shadows of Ecstasy
by Charles Williams - eBooks@Adelaide
The novel tells of a mysterious invasion that threatens Europe from Africa. United in a crusade against death, the powers of the 'Dark Continent' rise up with exultant paganism. Williams had a genius for choosing strange themes for his novels.
(5833 views)