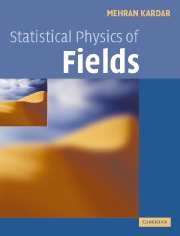 Introduction to Statistical Physics
by Eric Bertin - ENS Lyon
This introductory text was aimed at giving a basic knowledge of the concepts and methods of statistical physics to the readers, so that they could later on follow more advanced lectures on diverse topics in the field of complex systems.
(9312 views)

Statistical Field Theory
by R R Horgan - University of Cambridge
These notes are concerned with the physics of phase transitions: the phenomenon that in particular environments, many systems exhibit singularities in the thermodynamic variables which best describe the macroscopic state of the system.
(6514 views)

Study notes for Statistical Physics
by W. David McComb - Bookboon
This is an academic textbook in three parts, intended for a one-semester course in statistical physics at honours BSc level. Throughout the book, the emphasis is on a clear, concise exposition, with all steps being clearly explained.
(3969 views)