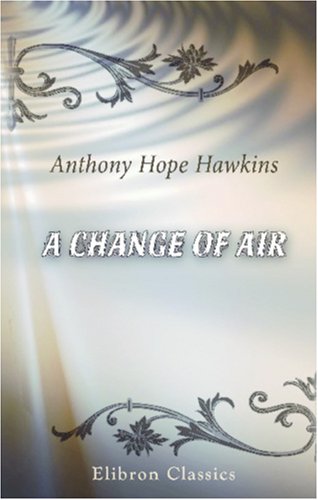 A Change of Air
by Anthony Hope

Description:
Dale Bannister, the wild young poet, is a most picturesque and uncommon character. The story moves on steadily, and while it teaches a lesson of moderation and charity, it does so entirely by the acts and thoughts of the characters without any sermonizing on the part of the author.

Tales of Two People
by Anthony Hope - Methuen & Co.
Ambrose Calverley, who has travelled and adventured for many years, returns to England on the death of his father. He takes up residence at Scarsmore Castle on the coast of Yorkshire, with his friends Leonard 'Cromlech' Stubb, a history researcher...
(2883 views)

The Secret of the Tower
by Anthony Hope - D. Appleton & co.
A swashbuckling tale of romance and adventure. The book was published in 1919 and takes place in a little village just outside of London. Something odd is going on in Cottage Tower and the townsfolk of Inkston are trying to figure it out.
(3446 views)

Rupert of Hentzau
by Anthony Hope - J. W. Arrowsmith
Foiled in his previous attempts to gain power in Ruritania, Rupert, prince of villains, seeks revenge. Every year, Queen Flavia sends a rose to Rassendyll, the man she loves and when she is indiscreet enough to send a letter, Rupert sees his chance.
(5517 views)

The God in the Car
by Anthony Hope - D. Appleton & co.
Next door to Mrs. Dennison's large house in Curzon Street there lived, in a small house, a friend of hers, a certain Mrs. Cormack. She was a Frenchwoman, who had been married to an Englishman, and was now his most resigned widow ...
(3632 views)