Introduction to Representations of Real Semisimple Lie Groups
by Matvei Libine - arXiv , 2012
These are lecture notes for a one semester introductory course I gave at Indiana University. The goal was to make this exposition as clear and elementary as possible. A particular emphasis is given on examples involving SU(1,1).
(6003 views)

Symplectic Reflection Algebras
by Gwyn Bellamy - arXiv , 2012
The emphasis throughout is on examples to illustrate the many different facets of symplectic reflection algebras. Exercises are included at the end of each lecture in order for the student to get a better feel for these algebras.
(6820 views)

Lectures on Some Aspects of p-Adic Analysis
by F. Bruhat - Tata Institute of Fundamental Research , 1963
The text covers the classical theory of valuated fields, results about representations of classical groups over a locally compact valuated field, and Dwork's proof of the rationality of the zeta function of an algebraic variety over a finite field.
(7369 views)

Lectures on Lie Groups and Representations of Locally Compact Groups
by F. Bruhat - Tata Institute of Fundamental Research , 1958
We consider some heterogeneous topics relating to Lie groups and the general theory of representations of locally compact groups. We have rigidly adhered to the analytic approach in establishing the relations between Lie groups and Lie algebras.
(9901 views)

Finite Group Representations for the Pure Mathematician
by Peter Webb - University of Minnesota , 2007
The book is intended to be used as a learning tool by people who do not know the subject. It is intended to be appropriate for non-specialists in the area of representation theory, such as those whose primary interest is topology or combinatorics.
(8912 views)

Lectures on Representation Theory and Invariant Theory
by William Crawley-Boevey - University of Leeds , 1990
These are lectures on the symmetric group, the general linear group and invariant theory. The course covered as much of the classical theory as time allowed. The text requires some knowledge of rings and modules, character theory, affine varieties.
(10884 views)

Introduction to Representation Theory
by Pavel Etingof, at al. - MIT , 2009
Representation theory studies symmetry in linear spaces. It is a beautiful mathematical subject which has many applications, ranging from number theory and combinatorics to geometry, probability theory, quantum mechanics and quantum field theory.
(12237 views)

Varieties of Lattices
by Peter Jipsen, Henry Rose - Springer , 1992
Presents the main results about modular and nonmodular varieties, equational bases and the amalgamation property in a uniform way. The text includes preliminaries that make the material accessible to anyone with basic knowledge of universal algebra.
(10772 views) 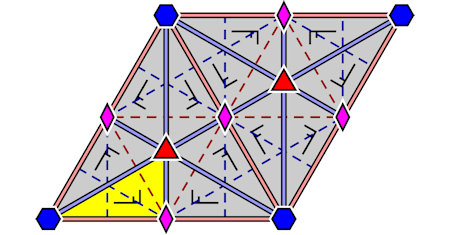