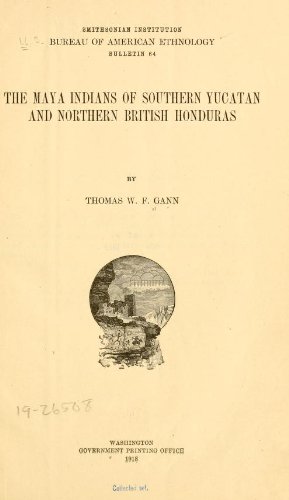 Description:
The southern and eastern parts of Yucatan, from Tuluum in the north to the Rio Hondo in the south, are occupied today by two tribes of Maya Indians, the Santa Cruz and Icaiche or Chichanha. The number of Santa Cruz was estimated by Sapper in 1895 at about 8,000 to 10,000, but at the present day has probably been reduced to about 5,000.

The Story of the British Race
by John Munro - D. Appleton and Company
The book brings the important views of modern anthropologists before the general public in familiar language. It will tend to destroy some errors regarding the origin and pedigree of the nation which have infected life and literature for ages.
(10072 views)

The Origin of Man and of his Superstitions
by Carveth Read - University Press
In its first part the book explains a hypothesis that the human race has descended from some ape-like stock by a series of changes which began and, until recently, were maintained by the practice of hunting in pack for animal food.
(14501 views)