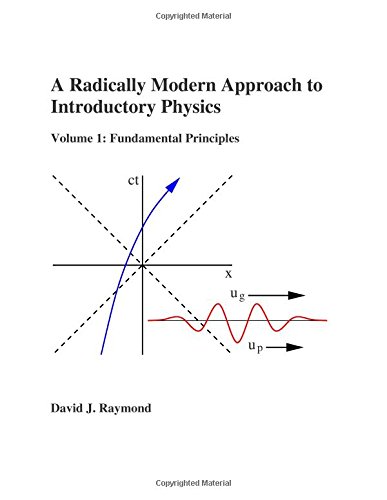 Description:
Many physics teachers have recognized that the standard, calculus-based freshman physics course has stagnated, with texts today looking much like they did 50 years ago and student interest at a low point. A reform movement has developed in the last decade to attempt to remedy this situation, with some reformers trying to teach the conventional materials in an unconventional way, and others trying to introduce new material. Starting with waves and relativity, I attempt to develop all of physics in a modern context rather than adding a bit of modern physics at the end. I hope that the result at least stimulates thinking on this important issue.

Modern Physics
by Paul Fendley - The University of Virginia
A lot of time in this class will be devoted to physics discovered in he years 1890-1930. In the course of the class, we'll try to really understand the key ideas of quantum mechanics, special relativity, general relativity and cosmology.
(5633 views)

Modern Physics
- Wikibooks
This book is for an introductory undergraduate study of calculus-based physics. It covers the topic of waves first, then the basics of motion, Special Relativity and Quantum Mechanics, Gravity, Electromagnetism, Fluid dynamics, Thermodynamics, etc.
(10926 views)

Modern Physics
by Michael Fowler - University of Virginia
This text contains the complete set of lecture notes for an introductory physics course for physics majors. We trace how the new ideas developed and examine the experimental and theoretical paradoxes that forced thinking out of the traditional path.
(5809 views)