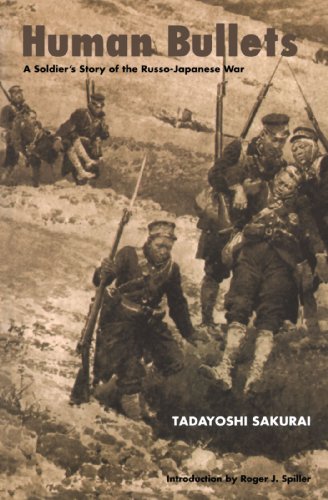 Human Bullets: A Soldier's Story of the Russo-Japanese War
by Tadayoshi Sakurai

Description:
This little book of Lieutenant Sakurai's will help to set us right in regard to the spirit in which the Japanese soldier fights. The story was told originally, not for a foreign audience, but to give to his own countrymen a true picture of the lives and deaths, the joys and sorrows, of the men who took Port Arthur. Its enthusiastic reception in Japan, where forty thousand copies were sold within the first year, is the justification of translator and editor in offering it to the American public.

Military Career of Napoleon the Great
by Montgomery B. Gibbs - E.A. Weeks & Co.
There has never been a time when the public was not eager to learn something new concerning the career of the man who once held all Europe prisoner in the folds of the French flag. The world regards Napoleon Bonaparte as a military genius ...
(7954 views)

War's Dark Frame
by Wadsworth Camp - Dodd, Mead and company
Abruptly we realized that war for the individual has the quality of a perpetual tragic disaster. Later, in the cities of Europe, in the devastated districts, in the towns under bombardment, in the front line trenches, that truth was forced upon me.
(7962 views)

The Generalship of Ulysses S. Grant
by J. F. C. Fuller - Dodd, Mead and Company
The reader leaves this book with a sense of knowing and understanding Grant, and believing that Grant's personality was the critical factor in the Union's 1864-1865 Virginia compaigns. This text is an essential Civil War reading.
(17466 views)

The Diary of a U-boat Commander
by Sir William Stephen Richard King-Hall - Feedbooks
The diary of a WWI U-Boat commander. A fascinating glimpse of life on the German U-boats during the intense submarine blockade. Iy also reminds us there were humans involved as we read of the thoughts and love of a man longing for his sweetheart.
(9902 views)