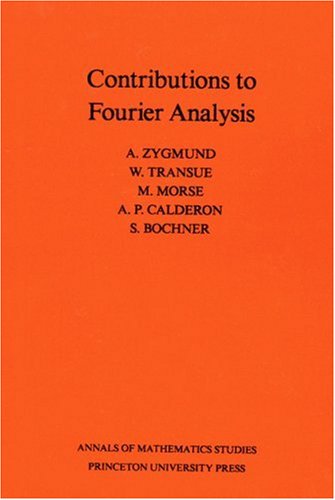 Contributions to Fourier Analysis
by A. Zygmund, et al.

Description:
In the theory of convergence and summability, whether for ordinary Fourier series or other expansions, emphasis is placed on the phenomenon of localization whenever such occurs, and in the present paper a certain aspect of this phenomenon will be studied for the problem of best approximation as well.

Harmonic Function Theory
by Sheldon Axler, Paul Bourdon, Wade Ramey - Springer
A book about harmonic functions in Euclidean space. Readers with a background in real and complex analysis at the beginning graduate level will feel comfortable with the text. The authors have taken care to motivate concepts and simplify proofs.
(11724 views)

Real Harmonic Analysis
by Pascal Auscher, Lashi Bandara - ANU eView
This book presents the material covered in graduate lectures delivered in 2010. Moving from the classical periodic setting to the real line, then to, nowadays, sets with minimal structures, the theory has reached a high level of applicability.
(3353 views)

Nonlinear Fourier Analysis
by Terence Tao, Christoph Thiele - arXiv
The nonlinear Fourier transform is the map from the potential of a one dimensional discrete Dirac operator to the transmission and reflection coefficients thereof. Emphasis is on this being a nonlinear variant of the classical Fourier series.
(7274 views)

Harmonic Analysis
by Russell Brown - University of Kentucky
These notes are intended for a course in harmonic analysis on Rn for graduate students. The background for this course is a course in real analysis which covers measure theory and the basic facts of life related to Lp spaces.
(7668 views)