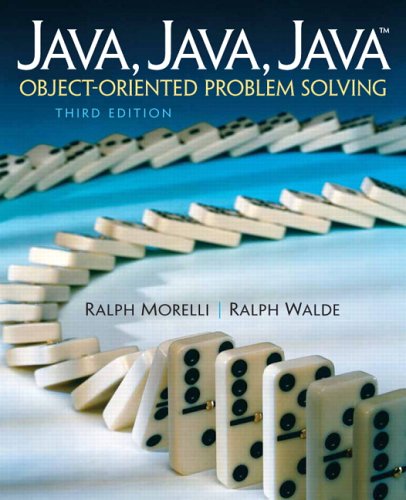 Description:
Functional and flexible, this guide takes an objects-first approach to Java programming and problem using games and puzzles. Updated to cover Java version 1.5 features, such as generic types, enumerated types, and the Scanner class. Offers independent introductions to both a command-line interface and a graphical user interface (GUI).

Introduction to Computer Science using Java
by Bradley Kjell - Central Connecticut State University
The text for a first course in computer science using the programming language Java. It covers the fundamentals of programming and of computer science. It is assumed that you have the Java version 5.0 or later and a text editor such as Notepad.
(25020 views)

Interactive Programming In Java
by Lynn Andrea Stein - Morgan Kaufmann Publishers
Introduction to computer programming intended for students in standard CS1 courses with no prior programming experience. It is the first textbook to rethink the traditional curriculum in light of the current interaction-based computer revolution.
(14476 views)

Introduction to Java
by Jane Meyerowitz, Deshendran Moodley - University of KwaZulu-Natal
These lecture notes are designed for use in the first year Computer Science modules. They provide an introduction to problem solving, programming, and the Java language. They are intended to serve as a complement to the formal lectures.
(7291 views)

Introduction to Programming in Java: An Interdisciplinary Approach
by Robert Sedgewick, Kevin Wayne - Princeton University
This book is an interdisciplinary approach to the traditional CS1 curriculum. It teaches all of the classic elements of programming. The book is organized around four areas of computer science: programming, machine architecture, theory, and systems.
(15698 views)