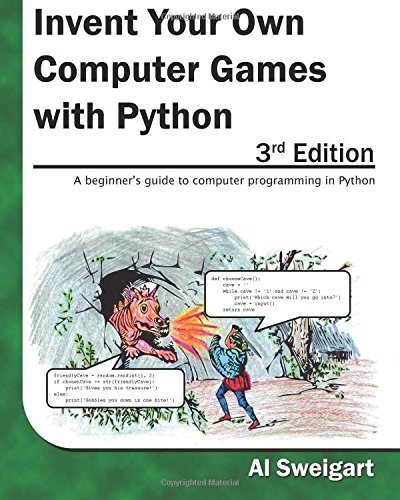 Invent Your Own Computer Games with Python
by Albert Sweigart

Description:
The current crop of programming books for kids that I've seen fell into two categories. First, books that did not teach programming so much as "game creation software" or in dumbed down languages to make programming "easy". Or second, they taught programming like a mathematics textbook: all principles and concepts with application left to the reader. This book takes a different approach: show the game source code right up front and explain programming principles from the examples.

Artificial Intelligence and Games
by Georgios N. Yannakakis, Julian Togelius - Springer
The book is the first comprehensive textbook on the application and use of artificial intelligence in games. It will be used by educators and students of graduate or advanced undergraduate courses on game AI as well as game AI practitioners at large.
(4313 views)

Simulating Humans: Computer Graphics Animation and Control
by N. I. Badler, C. B. Phillips, B. L. Webber - Oxford University Press, USA
This volume presents the problem of providing a surrogate or synthetic human for designers and engineers. The book is intended for engineers interested in understanding how a computer surrogate human can augment their analyses of designed environments.
(19839 views)

Programming Linux Games
by John R. Hall - No Starch Press
A complete guide to developing 2D Linux games, written by the Linux experts. It teaches the basics of Linux game programming and discusses important multimedia toolkits. You will learn to write and distribute Linux games.
(20138 views)