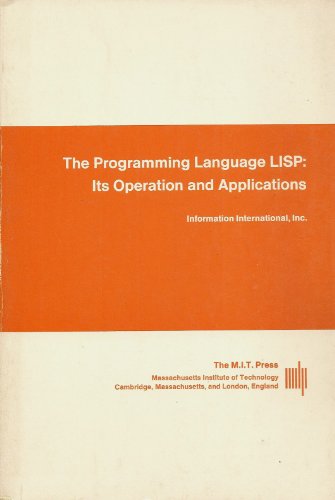 The Programming Language LISP: Its Operation and Applications
by E.C. Berkeley, D.G. Bobrow

Description:
The language LISP, short for 'LISt Processing' language, is a remarkable and powerful language, because not only does it govern the operation of a computer, but also it is a mathematical language of great flexibility and power for processing processes in mathematics, logic, and symbol manipulation in general.

Let Over Lambda: 50 Years of Lisp
by Doug Hoyte - Lulu.com
One of the most hardcore computer programming books out there. Starting with the fundamentals, it describes the most advanced features of the most advanced language: Common Lisp. This book is about macros, that is programs that write programs.
(17109 views)

Introduction to newLISP
- Wikibooks
newLISP combines the power of classic LISP with the facilities of a modern scripting language, such as regular expressions, network functions, multitasking, etc. This book is a straightforward and simple description of the basics of the language.
(12388 views)