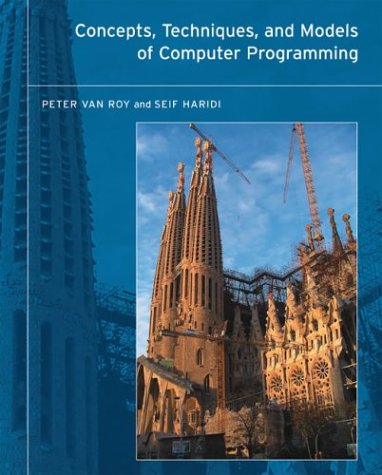 Description:
This innovative text presents computer programming as a unified discipline in a way that is both practical and scientifically sound. The book focuses on techniques of lasting value and explains them precisely in terms of a simple abstract machine. The book presents all major programming paradigms in a uniform framework that shows their deep relationships and how and where to use them together. After an introduction to programming concepts, the book presents both well-known and lesser-known computation models ("programming paradigms"). Each model has its own set of techniques and each is included on the basis of its usefulness in practice. The general models include declarative programming, declarative concurrency, message-passing concurrency, explicit state, object-oriented programming, shared-state concurrency, and relational programming. Specialized models include graphical user interface programming, distributed programming, and constraint programming. Each model is based on its kernel language -- a simple core language that consists of a small number of programmer- significant elements. The kernel languages are introduced progressively, adding concepts one by one, thus showing the deep relationships between different models. The kernel languages are defined precisely in terms of a simple abstract machine. Because a wide variety of languages and programming paradigms can be modeled by a small set of closely related kernel languages, this approach allows programmer and student to grasp the underlying unity of programming. The book has many program fragments and exercises, all of which can be run on the Mozart Programming System, an Open Source software package that features an interactive incremental development environment.

The Little Introduction To Programming
by Karl Seguin - codingintro.com
This book will teach you the fundamentals of programming and act as a foundation for whatever your programming goals may be. Rather than ignore complexities, we will face them head-on, in small steps, and unshroud the mysteries of computer language.
(14591 views)

The Practice of Parallel Programming
by Sergey A. Babkin - CreateSpace
This book provides an advanced guide to the issues of the parallel and multithreaded programming. It goes beyond the high-level design of the applications, into the details that are often overlooked but vital to make the programs work.
(19056 views)

Windows Programming
- Wikibooks
This book aims to be a comprehensive source for any developer who is interested in programming for the Windows platform. The reader is assumed to have a previous knowledge of the programming languages involved: C, C++, and Visual Basic.
(17198 views)

Learn to Program
by Chris Pine - Pragmatic Bookshelf
Pine teaches you how to program in Ruby with a minimum of fuss or bother. Starting with simple one-line programs, you'll see how to have your webpage send you email, to shuffle your music, to rename your photos from your digital camera, and more.
(19877 views)