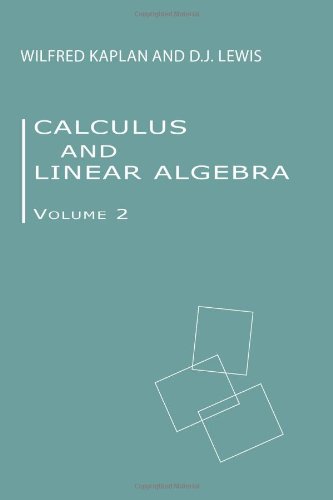 Description:
In the second volume of Calculus and Linear Algebra, the concept of linear algebra is further developed and applied to geometry, many-variable calculus, and differential equations. These topics are so closely related that the subject matter is revealed here as one well-defined, tightly knit bod of mathematics.

Elementary Functions and Applications
by Arthur Sullivan Gale, Charles William Watkeys - H. Holt & Co.
This book presents the elementary functions; algebraic and transcendental, and their applications to problems arising in various fields of knowledge. The treatment is confined to functions of one variable, with incidental exceptions ...
(6518 views)

Elliptic Integrals
by Harris Hancock - J. Wiley
Elliptic integrals originally arose in connection with the problem of the arc length of an ellipse. The author limits the monograph to the Legendre-Jacobi theory. He confines the discussion to the elliptic integrals of the first and second kinds.
(6659 views)

Calculus: Early Transcendentals
by David Guichard - Lyryx
The book covers the standard Calculus I and II courses, with Calculus III under development. It is accessible to first year college and university students. The emphasis in this course is on problems -- doing calculations and story problems.
(6567 views)