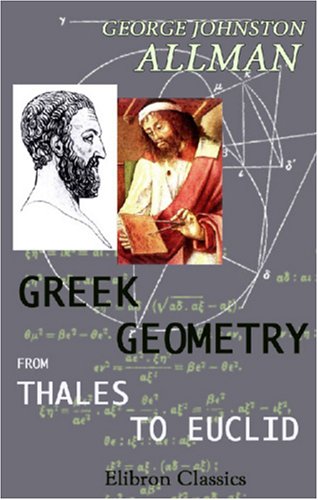 Greek Geometry from Thales to Euclid
by George Johnston Allman

Description:
The founders of Greek philosophy -- Thales and Pythagoras -- were also the founders of Greek Science, and from the time of Thales to that of Euclid and the foundation of the Museum of Alexandria, the development of science was, for the most part, the work of the Greek philosophers. With the foundation of the School of Alexandria, a second period commences; and henceforth, until the end of the scientific evolution of Greece, the cultivation of science was separated from that of philosophy, and pursued for its own sake.

A Brief History of Mathematics
by Karl Fink - Open Court Publishing Company
The book is intended to give students of mathematics an historical survey of the elementary parts of this science and to furnish the teacher of the elements opportunity to review connectedly points for the most part long familiar to him.
(7280 views)

The Story of Euclid
by W. B. Frankland - George Newnes
Euclid was a Greek mathematician, often referred to as the 'Father of Geometry'. His Elements is one of the most influential works in the history of mathematics, serving as the main textbook for teaching mathematics until the early 20th century.
(13922 views)

A Short Account of the History of Mathematics
by W. W. Rouse Ball - Dover Publications
This is the classic resource on the history of mathematics providing a deeper understanding of the subject and how it has impacted our culture. From the early Greek influences to the middle ages and the renaissance to the end of the 19th-century.
(14928 views)

The Pythagorean Theorem: Crown Jewel of Mathematics
by John C. Sparks - AuthorHouse
The book chronologically traces the Pythagorean theorem from the beginning, through 4000 years of Pythagorean proofs. The text presents some classic puzzles, amusements, and applications. An epilogue summarizes the importance of the theorem.
(17371 views)