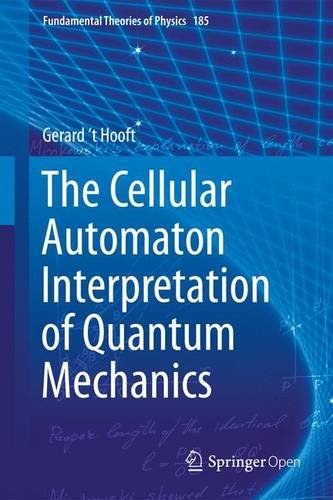 Description:
This book presents the deterministic view of quantum mechanics developed by Nobel Laureate Gerard 't Hooft. 't Hooft has revived the old hidden variable ideas, but now in a much more systematic way than usual. In this, quantum mechanics is viewed as a tool rather than a theory.

Do we really understand quantum mechanics?
by F. Laloe - Zuckschwerdt Publishers
A discussion of several aspects of our present understanding of quantum mechanics. The emphasis is put on the special correlations that this theory makes possible: they are forbidden by very general arguments based on realism and local causality.
(12693 views)

Quantum Models of Classical World
by Petr Hajicek - arXiv
This paper is a review of our recent work on three problems of non-relativistic quantum mechanics: realist interpretation, quantum theory of classical properties and the problem of quantum measurement. A considerable progress has been achieved...
(6547 views)

Relativistic Quantum Dynamics
by Eugene V. Stefanovich
A non-traditional perspective on space, time, particles, fields, and action-at-a-distance. This book is an attempt to build a consistent relativistic quantum theory of interacting particles. The developed theory is applied to realistic physical objects.
(15165 views)