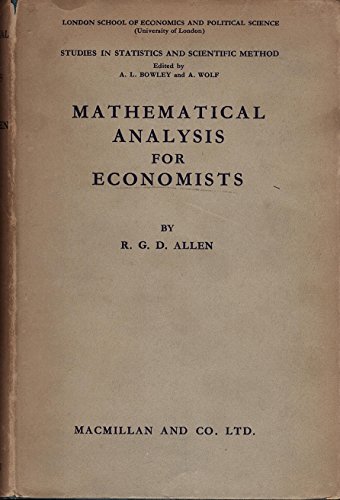 Description:
The author aims at providing a course of pure mathematics developed in the directions most useful to students of economics. At each stage the mathematical methods described are used in the elucidation of problems of economic theory. Illustrative examples are added to all chapters and it is hoped that the reader, in solving them, will become familiar with the mathematical tools and with their applications to concrete economic problems.

The Ultimate Foundation of Economic Science
by Ludwig von Mises - Liberty Fund Inc.
Mises argues that economics is a science because human action is a natural order of life and that it is the actions of humans that determine markets and capital decisions. This book brings together all of the themes from Mises's previous work.
(15539 views)

Making Economic Sense
by Murray N. Rothbard - Ludwig Von Mises Institute
The goal of this hefty tome by this master economist is to communicate with the public about economic theory and policy, in the form of articles. No economist has ever written so clearly about subjects usually wrapped in mystery.
(14162 views)

The Secret Sins of Economics
by Deirdre McCloskey - Prickly Paradigm Press
In this pamphlet, McCloskey reveals what she sees as the secret sins of economics (there are two) that no one will discuss. In her view, these sins cripple economics as a scientific enterprise. She writes with passion and an unusually wide scope.
(12376 views)

New Rules for the New Economy
by Kevin Kelly - Penguin
In this book Kelly tries to encapsulate the characteristics of the new economic order by laying out 10 rules for how the wired world operates. The result is a thought-provoking look at the behavior of networks and their effect on our economic lives.
(18810 views)