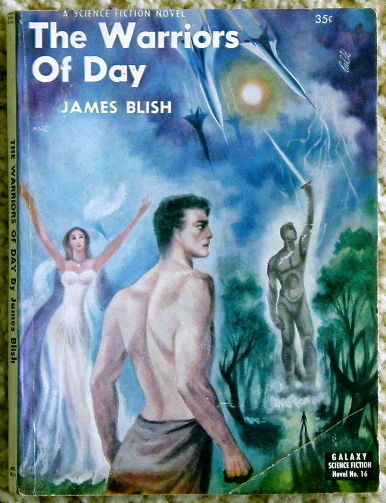 The Warriors of Day
by James Blish

Description:
Tipton Bond was a man who lived for challenges - and Earth had no more challenges for him. But on Xota: One of the giants' faces bent over him, sardonically benign. You are an Earthman, little human electron. You are a denizen of a planet which the Warriors of Day will reach and engulf, in a bare thousand years. Did you think to escape us by coming to Xota?

Pebble in the Sky
by Isaac Asimov - The Galaxy Publishing Corporation
One moment Joseph Schwartz is a happily retired tailor in Chicago, 1949. The next he's a helpless stranger on Earth during the heyday of the first Galactic Empire. Earth, as he soon learns, is a backwater, just a pebble in the sky, despised by all...
(3983 views)

Chessboard Planet
by Lewis Padgett - The Galaxy Publishing Corporation
It concerns Robert Cameron, trained in applied psychology, who finds himself being driven insane by a strange, unfathomable force. As an experienced psychometrician he fights the terrifying hallucinations. He knows his job is vital ...
(7747 views)

Murder in Space
by David V. Reed - The Galaxy Publishing Corporation
There is a place in the asteroid belt called the Hive. It is a deadly whirl of destruction filled with thousands of spiraling asteroids -- where no spaceship can enter and return in one piece. And deep within it lurks an unsolved murder.
(4441 views)