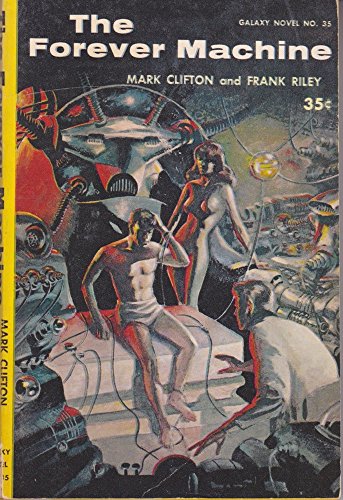 Description:
The government ordered it built: a thinking machine that could foresee catastrophe and eliminate human error. Research trainee Joe Carter sees another possibility -- create a machine that will make ordinary people telepathic -- and immortal.

Pebble in the Sky
by Isaac Asimov - The Galaxy Publishing Corporation
One moment Joseph Schwartz is a happily retired tailor in Chicago, 1949. The next he's a helpless stranger on Earth during the heyday of the first Galactic Empire. Earth, as he soon learns, is a backwater, just a pebble in the sky, despised by all...
(3972 views)

Well of the Worlds
by Lewis Padgett - Gerard Arthus
Clifford Sawyer, investigating ghosts in a mine, finds ancient beings from another world -- and gets swept up in a titanic struggle between for control of a parallel dimension. This novel was originally published in 'Startling Stories', in 1952.
(3870 views)

Murder in Space
by David V. Reed - The Galaxy Publishing Corporation
There is a place in the asteroid belt called the Hive. It is a deadly whirl of destruction filled with thousands of spiraling asteroids -- where no spaceship can enter and return in one piece. And deep within it lurks an unsolved murder.
(4434 views)

Fear
by L. Ron Hubbard - Gerard Arthus
Professor James Lowry doesn't believe in ghosts, the supernatural, the surreal, or any type of dark fantasy. Not until a gentle spring evening when his hat disappeared, and suddenly he couldn't remember the last four hours of his life.
(5033 views)