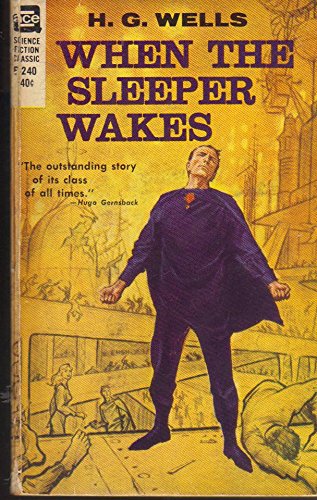 When the Sleeper Wakes
by H. G. Wells

Description:
A dystopian science fiction novel about a man who sleeps for two hundred and three years, waking up in a completely transformed London where he has become the richest man in the world. The main character awakes to see his dreams realised, and the future revealed to him in all its horrors and malformities.

A Connecticut Yankee in King Arthur's Court
by Mark Twain - Charles L. Webster & Co.
Satirical novel by Mark Twain, the tale of a commonsensical Yankee who is carried back in time to Britain in the Dark Ages, and it celebrates homespun ingenuity and democratic values in contrast to the superstitious ineptitude of a feudal monarchy.
(8839 views)

The Time Traders
by Andre Norton - The World Publishing Company
When Ross and Travis separately stumble upon America's top-secret time-travel project, their special skills come in handy in their new role as time agents, journeying back and forth in time from ancient Britain to the distant reaches of space.
(3216 views)

Time Crime
by H. Beam Piper - ManyBooks
A police procedural story, set in the world of the future. Human society has developed the technology to move laterally between parallel universes. The heroes of this story, Verken Vall and his wife, are ready to embark on a long-overdue vacation...
(5521 views)

Sojourn
by Jana G. Oliver - Dragon Moon Press
Victorian London is a dangerous place for the unwary. Mysterious shape-shifters haunt the streets, making friend and foe indistinguishable. In a few days, Jack the Ripper will add to his bloody legacy. But he isn’t the only threat in Whitechapel.
(13066 views)