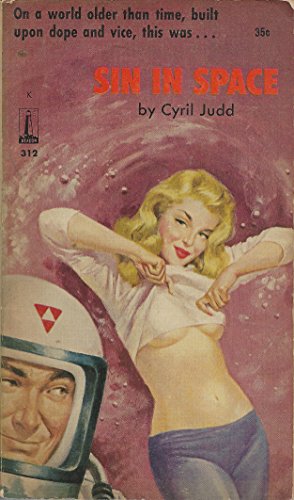 Sin in Space
by Cyril Judd

Description:
A rocketing, sensational expose of sin in space: a story about a drug deadlier than heroin, more vicious than morphine -- this was the Martian narcotic that drenched a planet in crime and perversion! 'Sin In Space' is Galaxy Science Fiction novel number 46.

Virgin Planet
by Poul Anderson - The Galaxy Publishing Corporation
He is Davis Bertram, a space-explorer. But how can he convince them he really is a man? Their legends have built Men into gods. Trying to be worthy of the Coming, the women imitate masculine virtues. They are warlike, ambitious, ruthless.
(3671 views)

Fear
by L. Ron Hubbard - Gerard Arthus
Professor James Lowry doesn't believe in ghosts, the supernatural, the surreal, or any type of dark fantasy. Not until a gentle spring evening when his hat disappeared, and suddenly he couldn't remember the last four hours of his life.
(5033 views)

Three Go Back
by J. Leslie Mitchell - The Galaxy Publishing Corporation
When their transatlantic airship is destroyed, three survivors find themselves in a lost world 25,000 years in the past, a world peopled by Neanderthals and Cro-Magnons. Claire Stranlay must somehow survive and does so in the only way she knows how.
(3759 views)

Murder in Space
by David V. Reed - The Galaxy Publishing Corporation
There is a place in the asteroid belt called the Hive. It is a deadly whirl of destruction filled with thousands of spiraling asteroids -- where no spaceship can enter and return in one piece. And deep within it lurks an unsolved murder.
(4434 views)